Due to the fact that cryptocurrencies have been around for a while and have quickly grown in popularity in recent years, they are now regularly seen in the portfolios of both individual and institutional investors. Тhe number of crypto ATMs around us is evidently increasing and they are becoming more widespread and accessible in many countries. Cryptocurrency ATMs are frequently seen as a reliable indicator of a nation’s readiness to facilitate cryptocurrency adoption. Therefore, the analyst team at BonusInsider decided to find the countries with the Highest Number of Crypto ATMs per Capita. We combined data from Coin ATM Radar with population data from Worldometer to calculate the number of crypto ATMs per 100,000 people. 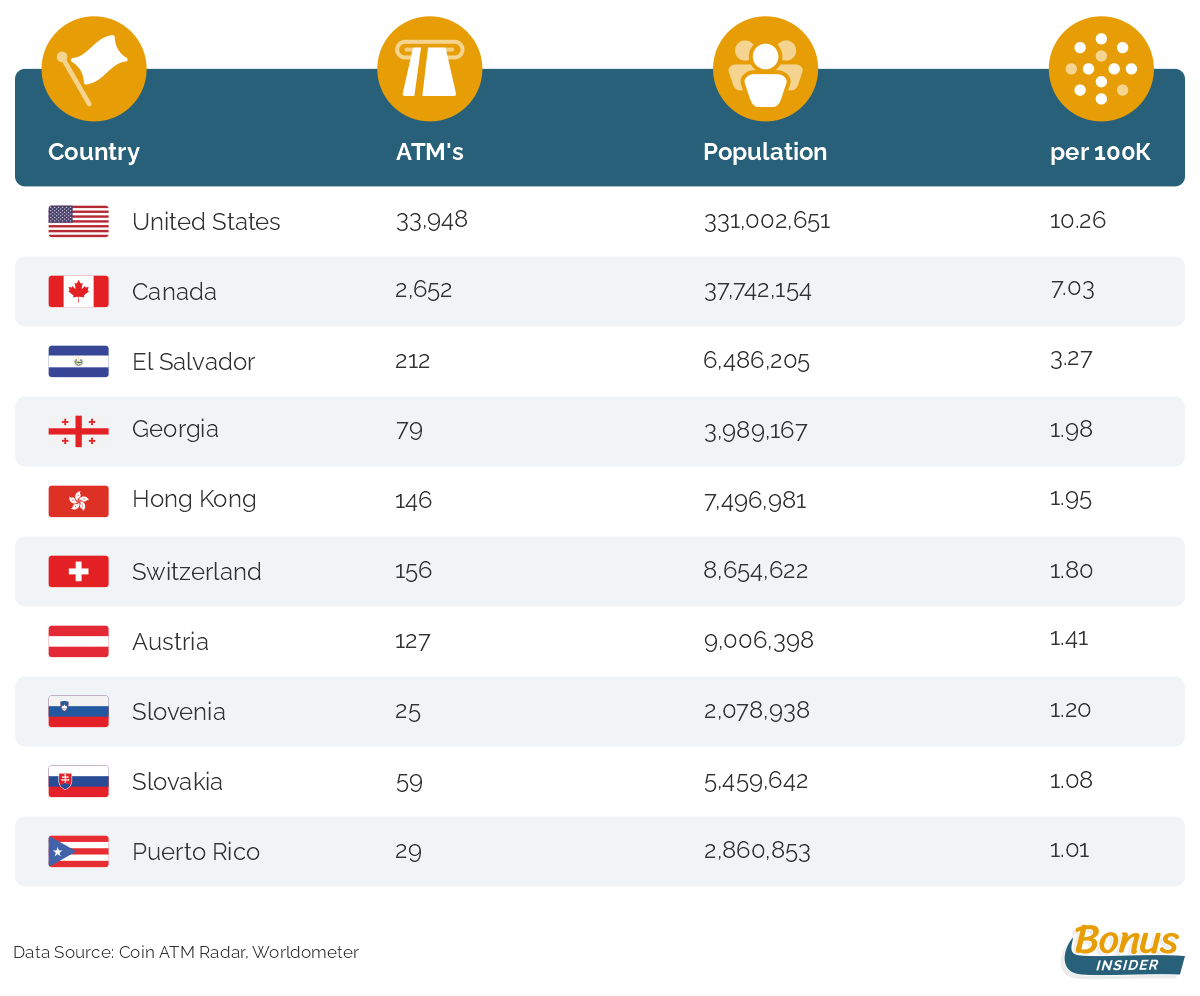 ATM’s in the US

It’s hardly surprising that the US leads the list with nearly 90% of all cryptocurrency ATMs installed worldwide. The number of ATMs in the United States is 33,948, which equals 10 ATMs per 100,000 people. Leading the way is Los Angeles with over 2,000 operating crypto ATMs, followed by Houston, Chicago, and Dallas with roughly 1,200 each.

Canada is rumored to have the potential to be the next best place to dig for crypto and with 7 ATMs per 100,000 people (2,652 for the entire country), it takes the second position in the ranking. The highest concentration of crypto ATMs is along the Canada-US border, with a huge percentage in Toronto – 941 crypto ATMs.

El Salvador ranks third with 212 units and 3 ATMs per 100,000 inhabitants. Under President Nayib Bukele, the nation has a pro-crypto government that wants to advance the small Central American nation in this industry. The nation boasts more than 4 million crypto users or almost 60% of its entire population, and BTC has been recognized as legal cash.

The former Soviet republic of Georgia is an unlikely entry in this ranking but with 79 crypto ATMs and a population of around 4 million people, it has almost 2 machines per 100,000 residents. Due to a lack of regulation and affordable electricity, crypto mining has gained popularity in the country in the past couple of years. Dozens of crypto ATMs have been installed in recent months, most of which are in the capital city of Tbilisi.

Although Hong Kong exists as a special administrative region controlled by the People’s Republic of China, experts deemed it worthy of consideration as a stand-alone country for this study. With a population of 7.5 million people, Hong Kong ranks fifth with 146 ATMs or 1.95 per 100,000 residents.

With 156 machines and a population of around 8.7 million, Switzerland comes sixth in the ranking with 1.80 ATMs per 100,000 people. The nation has fair tax rates for cryptocurrencies, sees them as assets, and accepts bitcoin as payment in a bunch of areas.
An intriguing fact is that Zug, a tiny town in Switzerland, is also known as Crypto Valley due to the concentration of blockchain companies there.

We can discover cryptocurrency ATMs in Austria in 127 places, with about half in Vienna and the other major cities. Despite the significant cryptocurrency fraud at the start of 2018, Austria continues to rank with 1.41 crypto ATM for every 100,000 residents.

A former Yugoslavian republic, Slovenia is a small nation with a population of only 2 million people. Yet, until just a few years ago, it was one of the leaders in cryptocurrency adoption. However, since 2018, banks in Slovenia are no longer allowed to sell crypto since it has not been recognized as a financial product. There are still plenty of cryptocurrency ATMs, 1.2 per 100,000 residents or a total of 25 machines.

With 59 crypto ATMs, 23 of which in the capital city of Bratislava, Slovakia is one of the countries with the largest number of units per capita – 1.08 per 100,000 people. The In fact, one of the first permanent crypto ATMs in Europe was installed in Slovakia back in 2013 – the country, along with Sweden and Finland, claims to have been the first in Europe to have a Bitcoin ATM.

Last on the list with 1 crypto ATM per 100,000 residents is the Caribbean island nation of Puerto Rico. An unincorporated U.S. territory, Puerto Rico is in a worse economic situation than mainland US states. Still, it has a surprisingly high number of cryptocurrency ATMs – 29 units, whereas fewer than 3 million live on the island.

“Growing demand for cryptocurrencies and surge in the number of crypto adopters suggest a shift in the investment paradigm, which Is mostly driven by growing younger population, thereby propelling the crypto atm market growth. It’s noticeable that an increasing number of merchants and other company owners are putting bitcoin ATMs in their establishments as cryptocurrency usage continues to increase around the globe.”

In conclusion, crypto ATMs surely make trading alternatives for users easier, but we shouldn’t forget that they also have the drawback of being increasingly exploited for money laundering.