Cryptocurrency adoption has increased over the past few years, and today, it is easier to spend your crypto than ever, especially if you have some bitcoins laying around – or, rather, safely stored in a crypto wallet. Although you can buy almost anything with bitcoin both online and in-store, some people are still struggling to find retailers accepting the valuable coin. And some are wondering what’s the smartest or most appropriate way to spend their BTC.

One early bitcoin adopter decided to buy pizza and ended up making history. In 2010, Laszlo Hanyecz had just mined a novel cryptocurrency and bought two Papa Johns pizza pies in what is considered the first ever recorded real-world transaction using crypto. The price for the pair was roughly $41 or 10,000 bitcoins, an amount which would be equivalent to more than $210 million today (the current rate is appr. $21,060 on CoinDesk). So, would you spend your Bitcoins on pizza?

The BonusInisder team decided to organise a survey through MarketsChain.com platform in order to understand more about the online behaviour of Bitcoin holders. Between 1st and 5th of September 2022 we surveyed 1115 bitcoin adopters from the US to find out how they spend their bitcoins and how many transactions per month they send. Look at the questions we asked and the answers we obtained from the bitcoin holders. 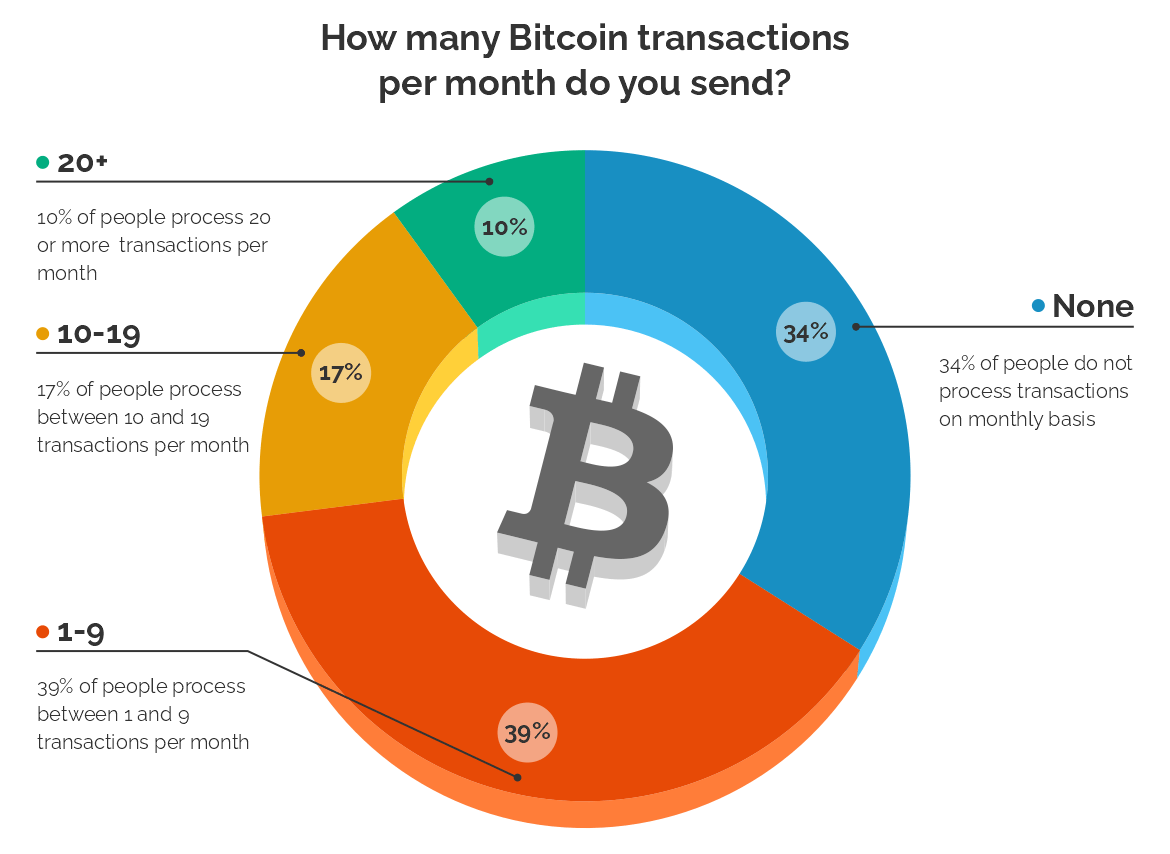 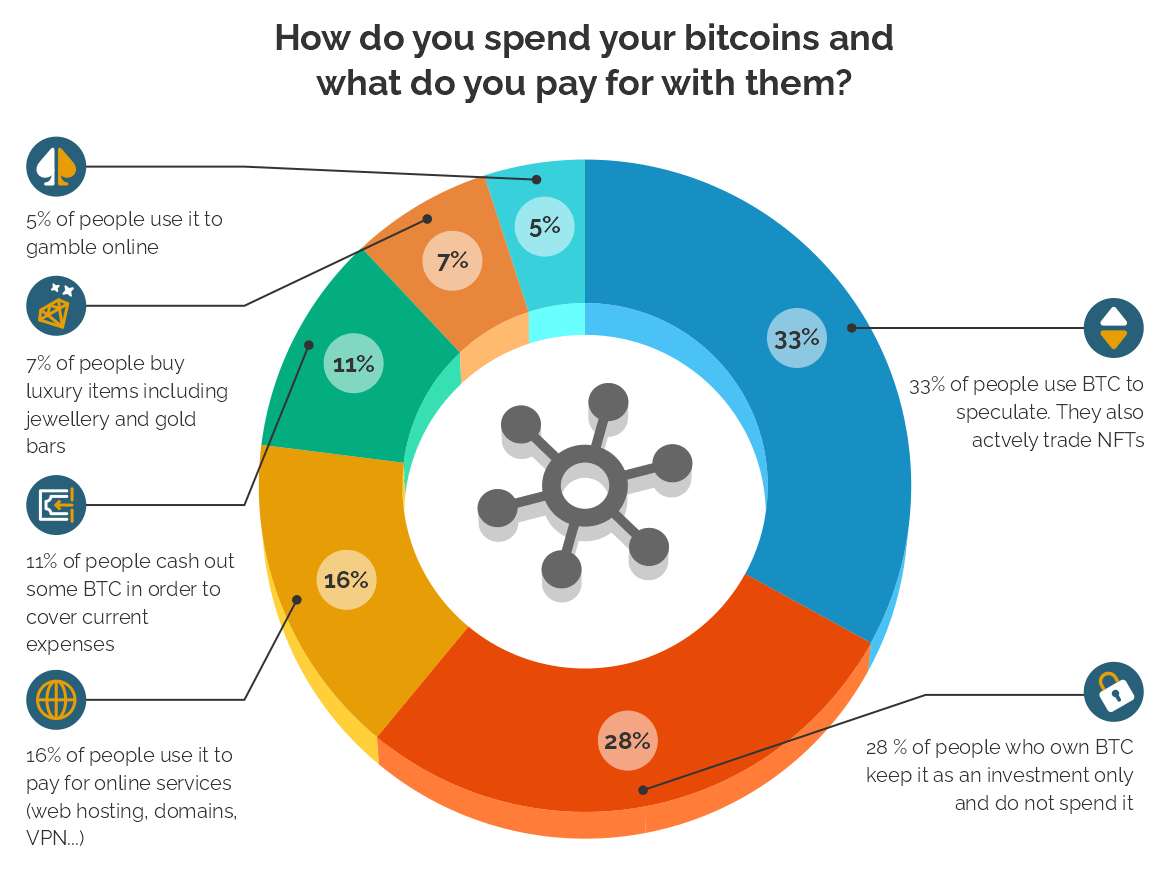 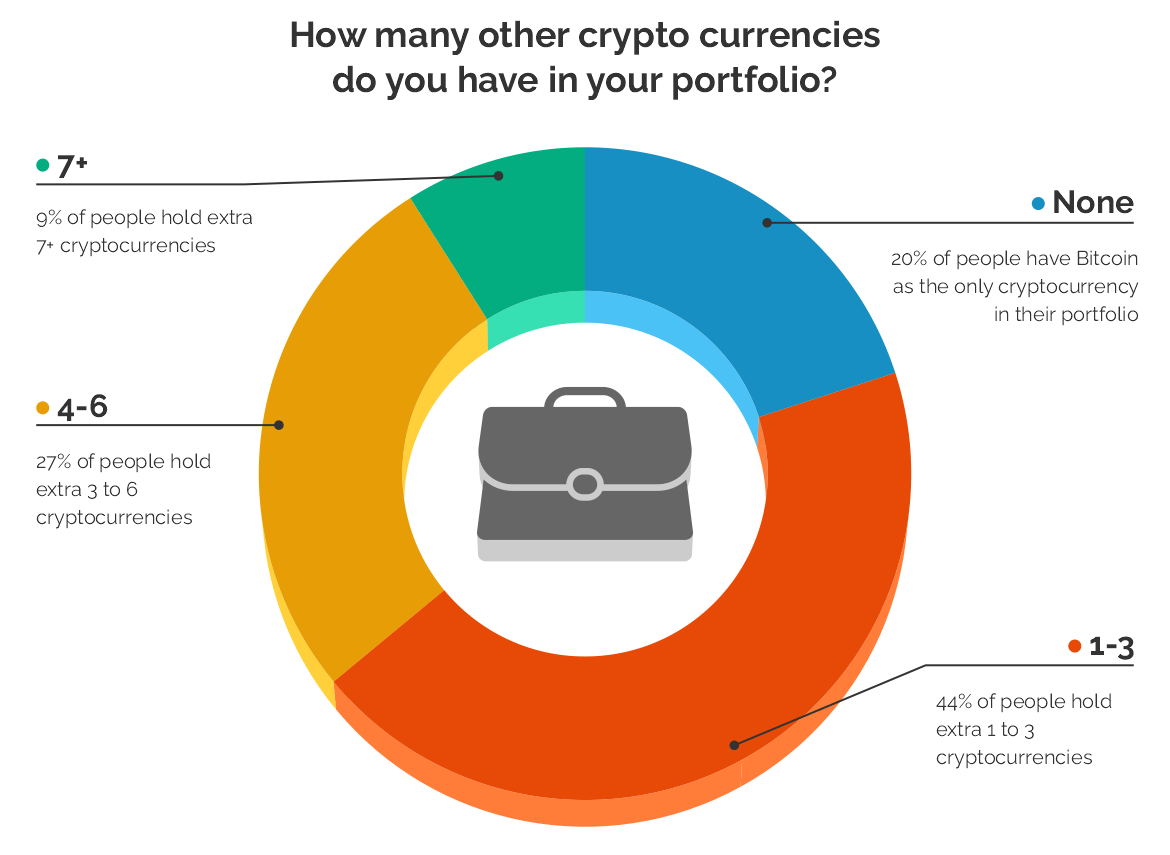 The infographic below shows how a selective group of 1115 bitcoin holders spend their bitcoins:

Crypto markets have crashed over the past year – bitcoin, in particular, is down more than 50% from its all-time high in November 2021. However, most people still use their crypto to trade. In our survey, 33% of bitcoin holders use BTC to speculate on the crypto markets. They buy and sell other crypto currencies, as well as NFTs.

Now, this is very different than buying goods or services with bitcoin. Speculating on crypto markets comes with its unique risks and experts point out that bitcoin is increasingly acting like a risk asset. Buying and selling NFTs or non-fungible tokens is also a tricky business although it is, for some artists and traders, a hot and very lucrative market.

Bitcoin as An Investment

Remember Laszlo Hanyecz who blew a ton of bitcoins on two pizzas? In an attempt to be smarter, many people believe it is best to store their crypto in a reliable, secure wallet and wait until its price increases significantly. And when it does, they could be millionaires or even better, billionaires.

The survey of U.S. bitcoin holders shows that nearly a third don’t spend their BTC at all. 28% of people keep the currency as an investment. Another 7% of respondents in the survey say they buy luxury items, including jewelry and gold bars. But is keeping BTC really smart?

Around 19.07 million bitcoins are in circulation (as of June 2022) which means that more than 90% of all bitcoins have already been mined. So what will happen to bitcoin holders when we reach the 21-million cap and there are no more bitcoins to mine? Is it better to spend them now or keep them as an investment? Experts believe that we will reach the supply cap around the year 2078, so most people should be safe keeping a bit of crypto in their wallets for the next few years.

Other Ways to Spend Bitcoin

As we’ve mentioned earlier, there are many ways to spend your crypto online or even in physical locations (although this option is still quite uncommon). 16% of U.S. bitcoin holders say they use their BTC to pay for various online services such as web hosting, domains, VPN services, and many more.

Interestingly enough, only 11% of respondents cash out some BTC in order to cover their current expenses. This means that few are using the cryptocurrency as actual money, whether that would include paying bills or buying different goods. Also, 5% of people say they use BTC to gamble online. This is actually one of the best ways to fund your online gambling since paying with crypto comes with no restrictions unlike bank transfers, for instance – some banks would not allow transactions to and from gambling sites. Many customers use Bitcoins to pay at sports betting sites as well.