A highly developed country, the United States is one of the richest places in the world, attracting thousands of immigrants with great job opportunities, high standards of living, and overall a promise for better life. It is considered one of the oldest and greatest democracies in the world and it ranks high in fundamental measures like economic competitiveness, human rights, quality of life, income, and wealth. At the same time, some of the most dangerous cities in the world are located in the U.S.

New statistics from World Population Review, analyzed by BonusInsider, for the top 50 cities with the most homicides per capita reveal that four of the most dangerous cities in the world are, in fact, within the United States. While the deadliest places outside war zones are, understandably, in poverty-stricken and politically unstable regions such as Latin America and South Africa, these four U.S. entries are quite surprising, to say the least. They include St. Louis, Baltimore, Detroit, and New Orleans, coming at 15th, 23rd, 46th and 50th places, respectively.

The list looks at the number of homicides per 100,000 inhabitants that have been committed within a year. It does not take into account other types of violent crimes such as assault, robbery and rape. It is also worth noting that the top 50 ranking this year is comprised entirely of cities within Latin America, South Africa, and The United States. 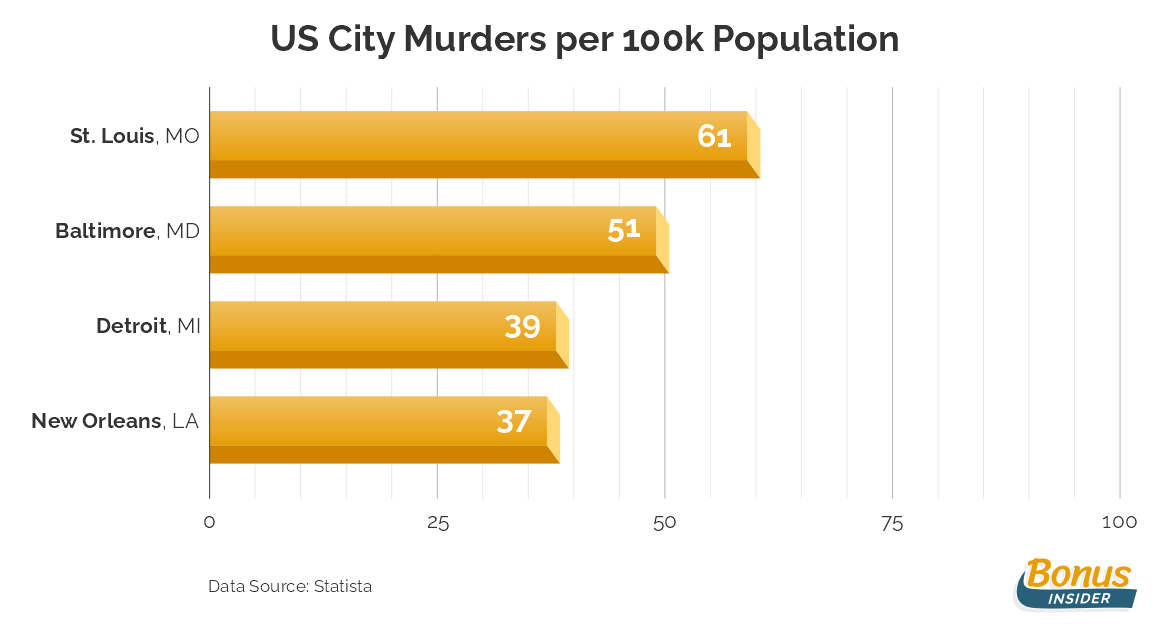 St. Louis has been the murder capital of the United States ever since 2014. It occupies the 15th spot in the list of the 50 most dangerous cities in the world with 61 homicides per 100,000 population. Moreover, in the official FBI statistics, St. Louis ranked first in violent crime and second in property crime across all U.S. cities with populations over 100,000 or more in 2016.

According to the FBI archive for 2016, 6017 violent crimes were committed in the city. This includes murder and nonnegligent manslaughter, rape, robbery, and aggravated assault. The data shows that 188 people were murdered that year.

However, an important factor should be considered when comparing murder rates for certain cities in the United States, including St. Louis. It is the second-largest city in the state of Missouri with a population of around 305,000 but its metropolitan area is home to nearly 3 million people – ten times more. Sometimes, crimes in the metropolitan area are recorded in the city or vice versa, fewer crimes may be recorded inside St. Louis city limits.

Notorious for its extremely high crime rates compared to the national average, Baltimore also ranks as the 23th most dangerous city in the world with 51 homicides per 100,000 population. As in most cities in the U.S., crime is concentrated within several neighborhoods ridden with poverty, drug gang activity, and violence. Historically, West Baltimore has seen the most crime problems but in 2016, the Coldstream Homestead Montebello neighborhood in Northeast Baltimore was the deadliest neighborhood – one out of every two shootings was fatal, compared to the city average of one in three.

The record homicide rate was set in 2015, when Baltimore had the highest homicide rate in its history – 52.5 per 100,000 people or 344 homicides. Of those, the vast majority, or 321 (93.3%) of the victims were African-American. Poverty and organized crime have been responsible for a lot of the violence in the city but another major problem for authorities in recent years has been drug use. According to the Drug Enforcement Administration (DEA), 10% of Baltimore’s population is addicted to heroin.

Detroit has also been widely known for decades for its high crime rates, which peaked in the 1980s and have ever since gradually decreased. The problem has been so widely publicized that in 2012, the media reported Detroit drivers had to pay more expensive car insurance due to the extremely high crime rates. Interestingly, since 1996 when the city legalized gambling and introduced casino gaming, the crime rate has dropped by 24 percent, according to the Crime Analysis Unit of the Detroit Police Department.

Homicide rates, however, have remained high for the most part, at least when compared to the rest of the country. The city recorded the highest number of murders in 1974 when 714 people were killed. A second peak followed in 1991 when 615 homicides were committed. Latest data shows Detroit has a murder rate of 39 homicides per 100,000. This makes Motor City the 46th most dangerous city in the world by homicide rate per capita.

Famous for its distinctive culture, Creole cuisine, and the Mardi Gras celebrations, New Orleans is one of the most preferred tourist destinations in the U.S. However, it also has a rate of 37 murders per 100,000 inhabitants. This makes it the 4th deadliest city in the country and the 50th most dangerous city in the world.