There are endless sources of inspiration for travelers nowadays and with pandemic travel restrictions having been largely lifted, you can explore nearly every corner of the world. There are still places rarely anyone would like to visit, and for a very good reason – they are the most dangerous countries and cities on Earth.

While destinations ruled by highly repressive regimes such as North Korea or war-torn states like Ukraine and Afghanistan are obviously unsafe for locals and tourists alike, many cities in otherwise conflict-free countries might be even more dangerous. Mexico, the leading destination for international tourists in Latin America in 2019 and 2020, has five entries in the list of the world’s ten deadliest cities in 2022. It was visited by 24 million people in 2020, far more than the number of arrivals recorded by the second country, Puerto Rico, which attracted only 2.5 million international tourists. Moreover, Mexico’s Tourism Ministry (Sectur) reported the arrival of nearly 10.27 million international tourists in the first half of 2022, an 83% compared to the same period last year and up 1.5% compared to pre-pandemic numbers in 2019.

Yet, data published earlier this year by the World Population Review and analysed by BonusInsider shows that Mexico is an extremely unsafe country both as a place to live in and a tourist destination. The Mexican city of Tijuana is named the world’s most dangerous city in 2022 with the highest murder rate per capita. The latest ranking of the most dangerous cities in the world includes 50 cities, with all entries in the Top 10 being in Latin America. The list ranks the cities based on homicides per 100,000 inhabitants, a standard statistical measurement that is used to compare cities, nations, etc. with different population sizes. 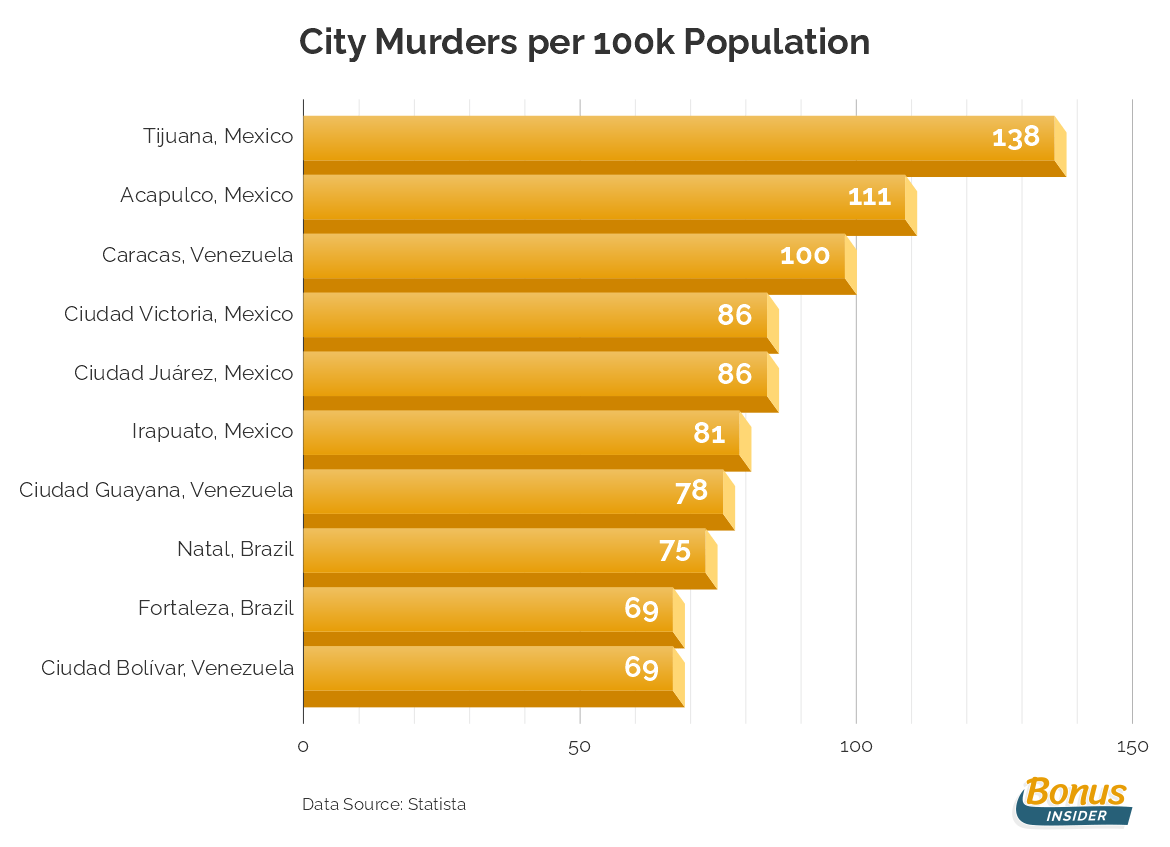 These are the ten most dangerous cities in the world to live in (or visit, for that matter) in 2022 based on the most recent murder rates per 100,000 inhabitants.

With 138 homicides per 100,000 citizens reported, the resort city of Tijuana is the most dangerous place in the world. It sits on the border with San Diego and attracts thousands of US tourists every day with its fascinating souvenir shops, bars, and the red-light district. But along with the cheap shopping and attractive drinking age of 18 (versus 21 in neighboring San Diego), Tijuana has a much darker side – it is a lucrative drug trafficking route and home to some of the most powerful drug cartels in Latin America.

In the past decade or so, the city has become a battleground for several rival gangs. The average number of homicides has been 2000 per year in the past few years. Baja California prosecutors say that so far in 2022, 882 murders were recorded. The most violent month was June – at least 196 people were killed, or an average of 7 per day.

Acapulco is Mexico’s largest beach and spa resort and was once a popular holiday destination for Hollywood stars and millionaires from the US. Its reputation drastically changed over the years due to the increasing poverty and unemployment both in Acapulco and within the wider region.

It should not come as a surprise, then, that it enters the list of the deadliest cities in the world to live in 2022 – the upsurge in drug trafficking and gang-related crime has turned Acapulco into Mexico’s murder capital. Shocking data shows 111 murders per 100,000 people. The violence seems to be escalating even more – in the first seven months following the election of Evelyn Salgado Pineda as the new Governor of the state of Guerrero, 645 intentional homicides were registered in the state according to the Executive Secretariat of the National Public Security System.

Caracas, the capital and largest city of Venezuela, has one of the highest per capita murder rates in the world – 100 homicides per 100,000 inhabitants. Even more chilling fact about the city is that most homicides and other violent crimes go unsolved. Furthermore, data for the murder rates in the country is usually published by non-governmental organizations since the Bolivarian government has denied access to homicide statistics for more than 17 years.

Although Venezuela has the largest oil reserves in the world, due to ineffective policies over the past decade it currently struggles with hyperinflation, extreme poverty, shortages of basic goods, malnutrition, and a high child mortality rate. With high rates of corruption and severe crime, it is no wonder why Caracas is often named the city with the highest homicide rate in the world outside of a warzone.

Home to a little over 300,000 people, Ciudad Victoria is the capital of the Mexican state of Tamaulipas on the US border. It has a homicide rate of 86 per 100,000 people. The city has seen a surge in violent crime rates over the past couple of years – armed robberies, assaults, and homicides have become common, along with the more “mundane” drug trade, corruption, and kidnappings.

In January 2021, Mexican police found 19 shot and burned bodies near Camargo, a small locality in Tamaulipas. In addition, hundreds of people, mostly truck drivers, have disappeared or have been killed on the highway connecting the states of Nuevo León and Tamaulipas. The 219-kilometer highway near Ciudad Victoria, which reaches the United States, is an important route for organized crime and drug trafficking. According to the Comisión Nacional de Búsqueda 71 people went missing there between October 2020 and June 2021.

With 86 homicides per 100,000 inhabitants, Cuidad Juárez is yet another Mexican city to appear on this list. It sits on the Rio Grande river and is home to 1.5 million people, which makes it the most populous city in the state of Chihuahua. Although Cuidad Juárez is a major manufacturing center, it is also among the world’s deadliest places to live in and visit.

The city has been struggling with organized crime, mass killings, and wars between narco cartels where, often, innocent bystanders get caught in the crossfire. Cuidad Juárez is also known as being extremely unsafe for women, in particular, who have been victims of human trafficking, violence, sex abuse, and murder. According to some estimates, around 500 women have been killed in the past couple of years.

Known as an agricultural and livestock-raising center, Irapuato is sometimes referred to as the World’s Strawberry Capital. However, it also has a murder rate of 81 per 100,000 people, so most tourists would probably prefer to stay away from its delicious fruits among other things. The increased criminal activity and the killings are usually caused by turf wars between the Santa Rosa de Lima Cartel and the Jalisco New Generation Cartel.

Cartel violence has soared in the past few years, leaving dozens of dead and injured following bloody gang wars. In the summer of 2020, two cartel-related massacres were committed in drug rehabilitation centers in Irapuato, with at least 38 killed in the shootings. Unable to put their trust in the police due to high corruption rates local people created a protection group called Justicieros De Irapuato in the aftermath.

Ciudad Guayana, a sprawling city with a population of around 950,000, is one of the most strategic cities for Venezuela. It sits on the south bank of the Orinoco River and has the most developed industry in the country. Still, the severe Venezuelan economic crisis has had its impact even here, resulting in increased unemployment, poverty, and crime rates.

Violent crime is of particular concern, especially when authorities do not do enough to prevent it or protect the people. The latest stats show a homicide rate of 78 per 100,000 people but the actual numbers might be even higher considering the rumors that police often cover up incidents where victims have suffered violent deaths. Their families are sometimes “advised” not to reveal information that could be viewed as sensitive by authorities.

For years, the coastal city of Natal has had a reputation for being one of the safest places in Brazil. It is the capital of the state of Rio Grande do Norte and has a population of nearly one million. Although the city was, indeed, one of the most popular tourist destinations in the country, this changed in the past 15 years – the murder rate for the state increased by a staggering 655%.

In 2017, at least 30 people were killed in a prison riot in the State Penitentiary of Alcacuz in Nisia Floresta near Natal. The incident was just one of the many violent attacks over a two-week period that ended with a death toll of 140. According to the most recent data, there were 1185, translating to a murder rate of 75 per 100,000 people.

With a population of more than 4.1 million, Fortaleza is one of the largest cities in Brazil. It is also among the most dangerous places to live in or visit in the world – more than 2700 people were killed within a year, according to the latest available stats. This means that the city has a homicide rate of 69 per 100,000 inhabitants.

Along with armed robberies, assaults, and kidnappings, drug gang conflicts also plague the city. When President Jair Bolsonaro was elected in 2019, he declared a much-publicized war on crime, promising to eliminate prison gang factions. This resulted in a large number of attacks across Fortaleza, including the torching of cars, buses, and mail trucks. Gang members attacked banks, a bridge, and city government buildings with petrol bombs and explosives.

The last city on this list is the capital of Venezuela’s southeastern Bolívar State. Ciudad Bolívar is an important river port, laying on the Orinoco River, and is home to nearly half a million people. Semi-official statistics and media reports alike paint a sad picture – crime rates have increased significantly in recent years as a result of the general unsafety in the country, the rising levels of poverty and inequality.

The city, as well as the state of Bolívar, has attracted armed groups and mega-gangs who now control the local mines and businesses, using bribes, extortion, and violence. Currently, there are at least seven different groups of guerrillas, garimpeiros (independent prospectors for minerals), and criminal syndicates whose criminal activity includes the trafficking of minerals, drugs, and arms. Violent crimes and homicides are also common, with a murder rate of 69 per 100,000 people in the city of Ciudad Bolívar.

Looking at the ten deadliest cities on the planet, we can say for sure that Latin America is, indeed, the most dangerous part of the world. The numbers and stats may change slightly each year but it is easy to see the larger trend – economic hardships and political unrest fuel criminal activity and violence. And while inhabitants of these dangerous cities have little choice, tourists should try to avoid visiting these places altogether. Dark tourism might have existed forever but tourists are particularly vulnerable and can become easy victims of theft, scams, and even violent crimes.