Considering technological developments such as smartphones, mapping, GPS, gaming consoles and social media, beliefs from over 100 years ago that technology would take over every aspect of life in the 21st century were pretty spot on. At times, science fiction writers have been almost clairvoyant in their vision of the future. On other occasions, however, they seem to have put more (or significantly less) faith in the potential of humanity than we deserve.

We found several science fiction movies from the past few decades that describe what the world would look like in 2022. As we are now living in what they perceived as the future, some of their predictions seem quite absurd and ridiculous. Others, however, seem to come very close to the current state of affairs – closer than we could ever have imagined. The team at BonusInsider decided to explore these predictions to see if they have come true – and in short, some of them definitely have. 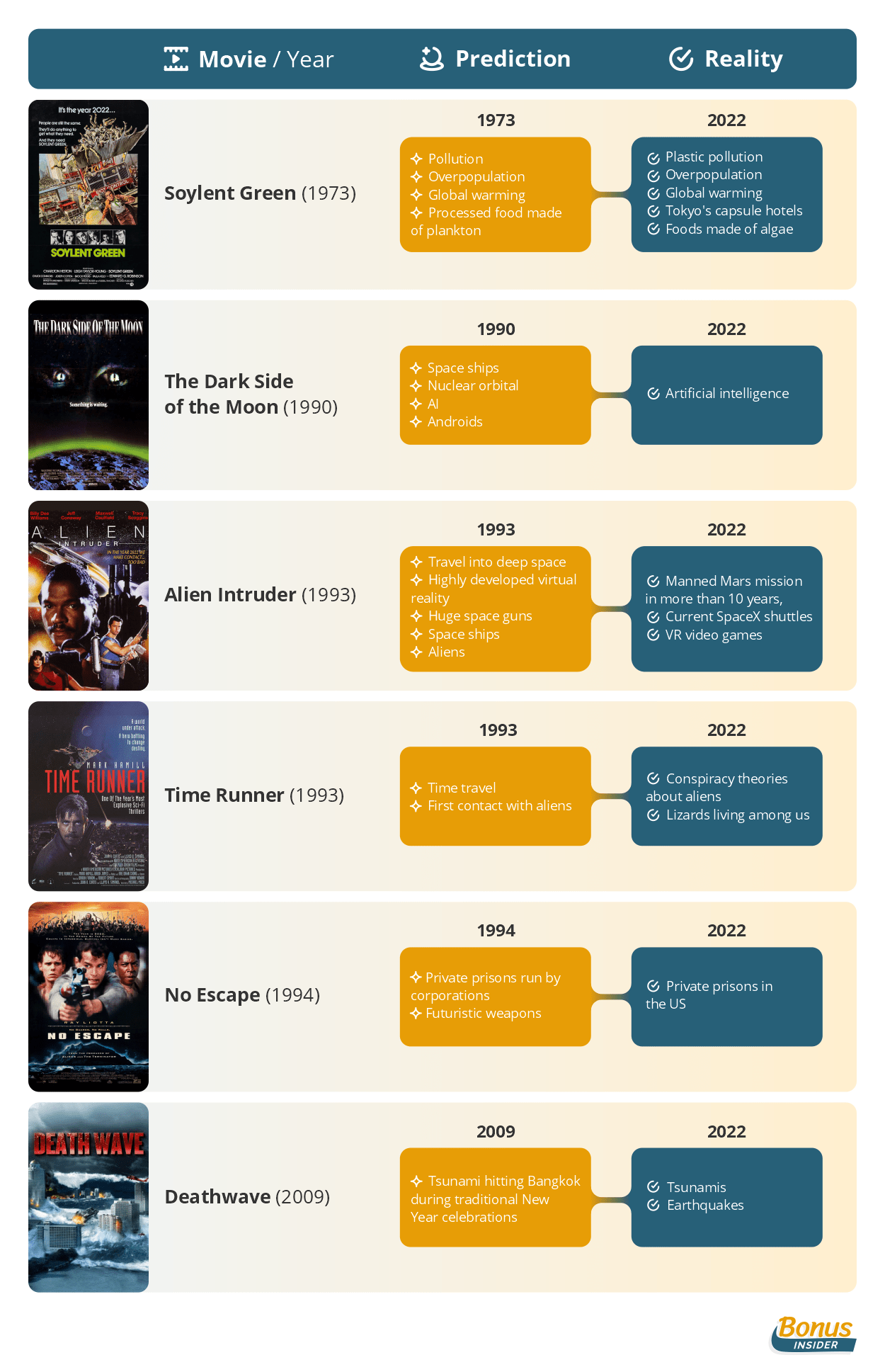 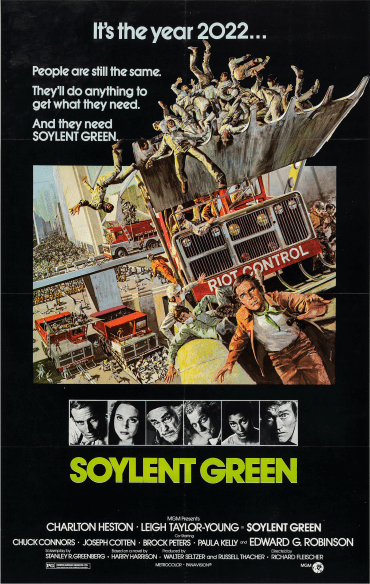 Starring Charlton Heston as police detective Robert Thorn, Soylent Green is a dystopian thriller set in New York of 2022. As 40 million people live in a polluted and overpopulated city, only the elite can afford spacious homes and real food. Global warming has caused a worldwide shortage of food and water, forcing common people to survive on highly processed wafers called Soylent Red, Soylent Yellow, and Soylent Green. While investigating the death of a board member of the Soylent Corporation, detective Thorn uncovers a horrible secret about the otherwise nutritious Soylent Green, which is supposed to be made of plankton. The truth makes the movie much darker than it seems initially.

Ecological and environmental issues are certainly real in 2022, although not nearly as serious. Various alternative foods have been proposed as a way to feed the growing global population, including lab-grown meat, algae, insects and so forth. The movie has also inspired a real-life wafer-like food called Soylent. 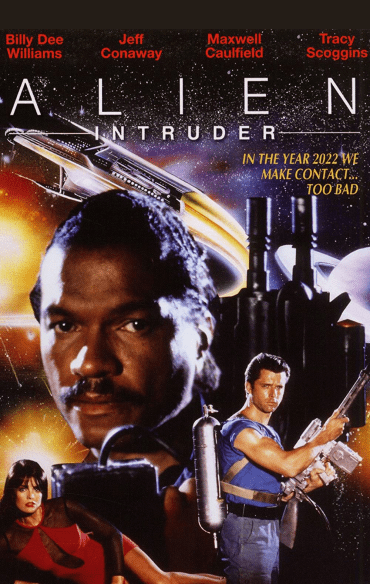 A group of convicts sentenced to life in prison are sent on a rescue mission in deep space in this action/sci-fi and mild horror film from 1993. While on the way to the lost ship, they’re about to salvage four men who have been allowed to spend time in a virtual reality world. A mystery woman appears in VR, making the men turn on each other – in fact, she is an alien whose DNA has been turned into a biochemical virus inside the ship’s computer system.

Traveling into deep space is currently not feasible, although NASA is planning a manned Mars mission to be carried out by the late 2030s. Although VR does exist, it is still very limited – in particular, there are certain graphical limits and limits of movement. 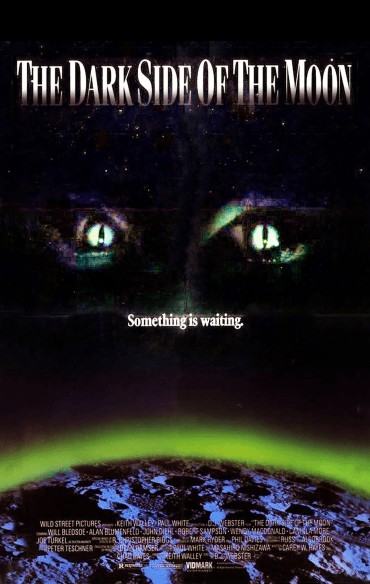 The Dark Side of the Moon is a science fiction horror film that was released on VHS in 1990. Its quite preposterous plot is probably one of the reasons for its generally low ratings online – 22% on Rotten Tomatoes and 4.9/10 on IMDb. A crew of a repair ship is sent to fix a nuclear orbital weapon, but after their ship malfunctions, they start drifting toward the dark side of the Moon. They see NASA’s old space shuttle Discovery and board it, trying to salvage parts for their ship, but an evil force is waiting for them. It turns out that the area they are in corresponds to the Bermuda Triangle, while the evil that attacks them is the Devil himself.

This vision of 2022 is quite absurd, considering the film was conceived barely three decades ago. It portrays highly developed AI, androids, spaceships, and, of course, nuclear orbital weapons, none of which exist in the same form today. However, orbital weapons have been researched and AI is constantly improving.

Aliens attack the Earth on October 6, 2022 in the 1993 film Time Runner. Captain Michael Raynor (Mark Hamill) is on a military space station and manages to escape before the aliens destroy the station. After a wormhole opens, he is sent 30 years into the past, where he discovers that the alien race was on our planet long before the invasion. The aliens look just like humans and act as sleeper agents with the mission to enable a future attack.

The movie couldn’t really make an accurate prediction, but it did show a conspiracy theory which is more popular now than ever – that many influential people are aliens, lizards, etc. Time travel is still out of reach, and a first contact with an alien race has not been made yet. 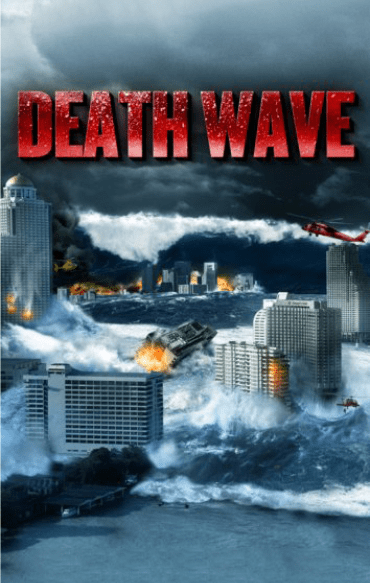 Deathwave is a disaster movie from Thailand whose aim is to warn us about tsunamis, earthquakes and other natural disasters that may change the world as we know it. It follows the young prime minister of Thailand, who tries to prevent such a scenario after the devastating 2004 tsunami. He orders the creation of a national disaster alarm center, but despite his efforts, a huge tsunami hits Bangkok on Songkran Day, the traditional New Year in Thailand.

Thailand is close to the so-called Ring of Fire, a region around the Pacific Ocean with many earthquakes and volcanic eruptions. In 2004, following a massive earthquake, Thailand, along with several other countries, was hit by the deadliest tsunami in recorded history. The movie offers no futuristic vision – instead, it depicts a possible near future based on events that happened less than 20 years ago. It simply warns us that it is impossible to predict natural disasters, and that unfortunately, it is just as impossible to prevent them.