Healthy lifestyles have surged in popularity over the past decade along with larger public awareness of the impact livestock has on the environment. Logically, veganism also spread like wildfire and today, most people have at least one friend who is vegan. To commemorate World Vegan Day on November 1, millions of people will be opting for at least one plant-based meal on Tuesday.

As this day gives both vegans and non-vegans the opportunity to try out a new vegan restaurant or dish, the team at BonusInsider ventured into identifying the ten highest-rated vegan restaurants in the entire United States. We used Google Places API to collect data on all restaurants that offer vegan cuisine in the 200 largest cities by population in the US and after sifting through thousands of diners, we found the 10 places with the highest online rating on the map. 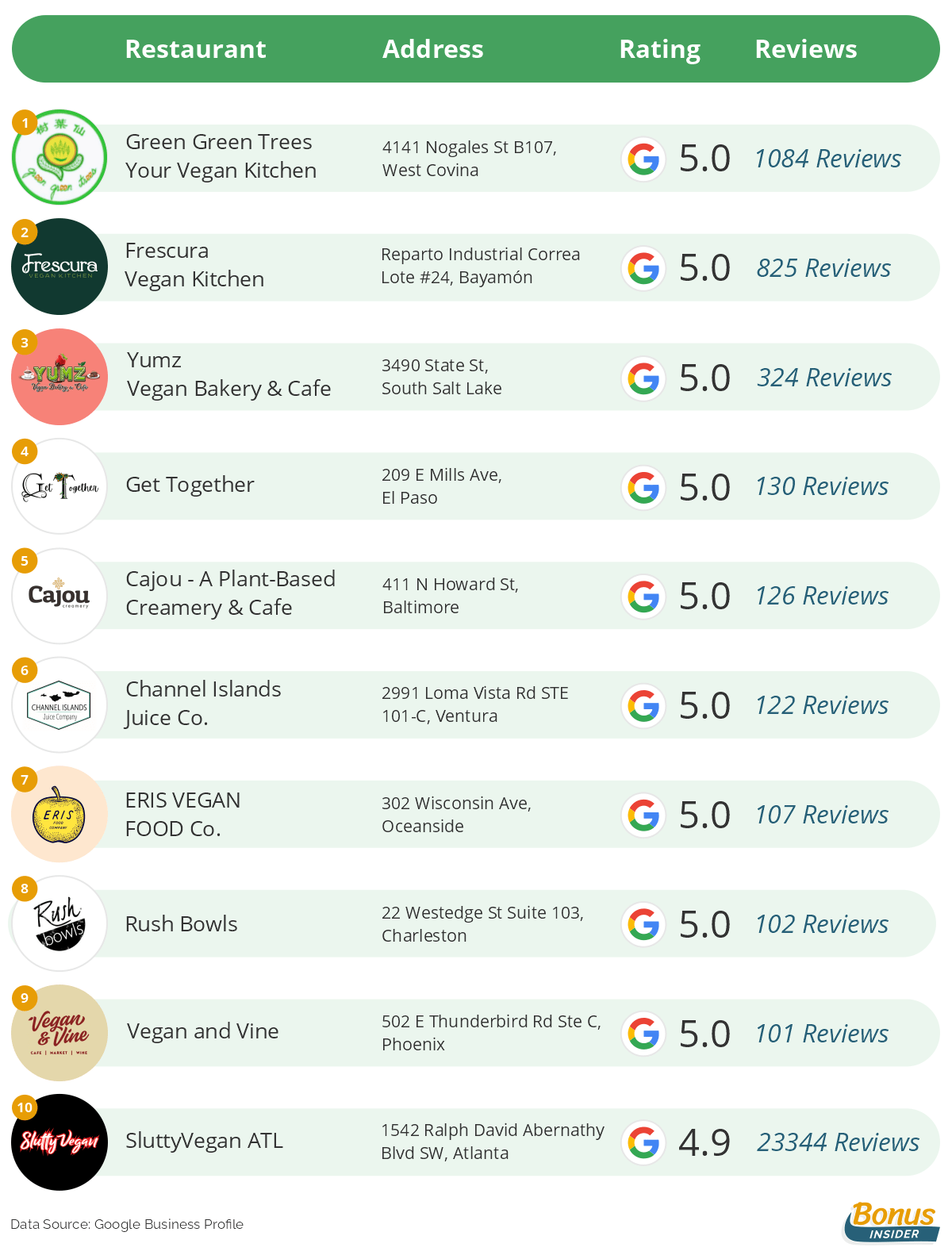 To compile a list of the highest-rated vegan restaurants, the team at BonusInsider wanted to gather as much data as possible. This is why we put to use Google Places API, which let us access customer review data on Google Maps. We searched for the “vegan” keyword, filtering for the “restaurant” place type in the 200 largest cities by population in the entire US. This gave us a long list of 9845 locations, so we sorted those firstly by rating and secondly by number of reviews, including only places with a minimum of 100 reviews to end up with the 10 highest-rated vegan restaurants in the United States.

This is a small eatery in San Juan and is considered one of the best vegan restaurants in Puerto Rico. Led by Chef Jessica, it serves a wide variety of vegan burgers (called vurgers), wraps and quesadillas, soups, salads, and main dishes, as well as delicious smoothies, acai bowls, and many more. Customers can also enjoy vegan cappuccinos and other coffees, or several types of superfood lattes.

This vegan diner is located in South Salt Lake and along with the wide variety of plant-based meals, it offers customers to have a great time playing the vintage arcade games installed in the restaurant. The menu focuses mainly on Latin cuisine so you can enjoy a wide variety of tacos, quesadillas, fajitas, Chile Verde, and chimichanga. The abundance of heavenly desserts, however, is probably the best thing about Yumz – and as this is also a bakery, there are plenty of cakes and you can even order an all-vegan birthday cake here.

4. Get Together, El Paso

Get Together is a charming, little restaurant in Downtown El Paso that encourages people to get together for a nice, delicious meal. It’s just 10 minutes away from the Mexican border, so it’s hardly a surprise that the menu combines the best of both countries – there are burgers and tacos, Mac & Cheese, and nachos, as well as wonderful vegan alternatives to classics such as the Tuná Ceviche, made with watermelon. And for those bringing their non-vegan friends to the restaurant, Get Together has meat dishes, as well.

Located in Downtown Baltimore, Cajoy is a remarkable ice-cream shop that offers the most delicious plant-based ice cream you’ve ever tasted. It guarantees that everything is hand-crafted from the best superfoods available and has no dairy, no gluten or soy, and no artificial ingredients. So, how do you make ice cream without milk, you would ask – from house-made cashew milk, mixed with organic wild blueberries, green cardamom, Saigon cinnamon, pistachios, raw cacao, or sweet potatoes.

This is a fruit juice shop and restaurant on Loma Vista Road between Oxnard and Ventura, around 60 miles from Los Angeles. The company, Channel Islands Juice Co., has two locations – one on Loma Vista Road and the other on E. Thompson Blvd. It offers cold-pressed organic juices from locally sourced ingredients that “nourish the mind, body and soul”. Apart from the various juices, nut milks, and wellness shots, the restaurant a menu full of has tasty and healthy breakfast meals, acai and chia seed bowls, plant-based tortilla wraps, red lentil pasta, and more.

This is a relatively new vegan restaurant in Oceanside, a city on the South Coast of California that lies between Los Angeles and San Diego. The restaurant is close to the beach and has a wonderful patio where customers can enjoy a wide variety of plant-based meals and kombucha. And since it serves Mexican-American fusion cuisine, there are plenty of tacos, seitan, jackfruit or coconut “fysh”, flatbreads, burgers, buddha bowls, etc.

Rush Bowls is a health food restaurant in West Side, a neighborhood in Charleston, South Carolina. As its name suggests, it focuses its menu on nutritious bowls with fruit, granola, and honey. The bowls are rich in healthy ingredients, protein, and vitamins, but most of all, they are always fresh and delicious. The restaurant also has a wide variety of smoothies, banana bread bites, and non-dairy or natural milk options.

Vegan and Vine is a family-owned business located on the Northwest Corner of 7th Street and Thunderbird in Phoenix. It is a cafe, market, and wine shop that serves plant-based comfort food, brunch, shared plates and elevated vegan dishes along with cocktails, wine, and coffee. The restaurant has an extensive wine list, while the menu includes vegan and vegetarian food, as well as special kids’ meals.