Every year, more than 1,700 people are killed in accidents on Britain’s roads, a figure that has remained relatively consistent over the past decade. While this sounds like a lot considering the constant improvements in road safety, statistics show that fewer people are killed or seriously injured on the roads than ever before.

In 1941, while the country was fighting World War II 9,169 people lost their lives in road accidents, the highest recorded fatality rate since the first national figures were published in 1926. The highest peacetime fatality rate was recorded in 1966, when 7,985 people lost their lives on the roads. What do current figures show, and which are the most dangerous roads in the UK? BonusInsider has extracted data for all road accidents in the UK for the past ten years, in order to identify the deadliest roads on which to travel.

Slight Increase in Traffic Deaths in 2021

In 2021, there were 101,087 traffic accidents resulting in personal injury in Great Britain, according to the Department for Transport. Fortunately, most of them, or roughly 77.5%, did not result in serious injuries. More than a fifth (21.06%) of the crashes were considered serious, while 1,474 of the collisions (1.46%) were fatal. The data shows that 1,608 people were killed in these accidents across the United Kingdom – 1,558 lost their lives in Great Britain and another 50 died in Northern Ireland. 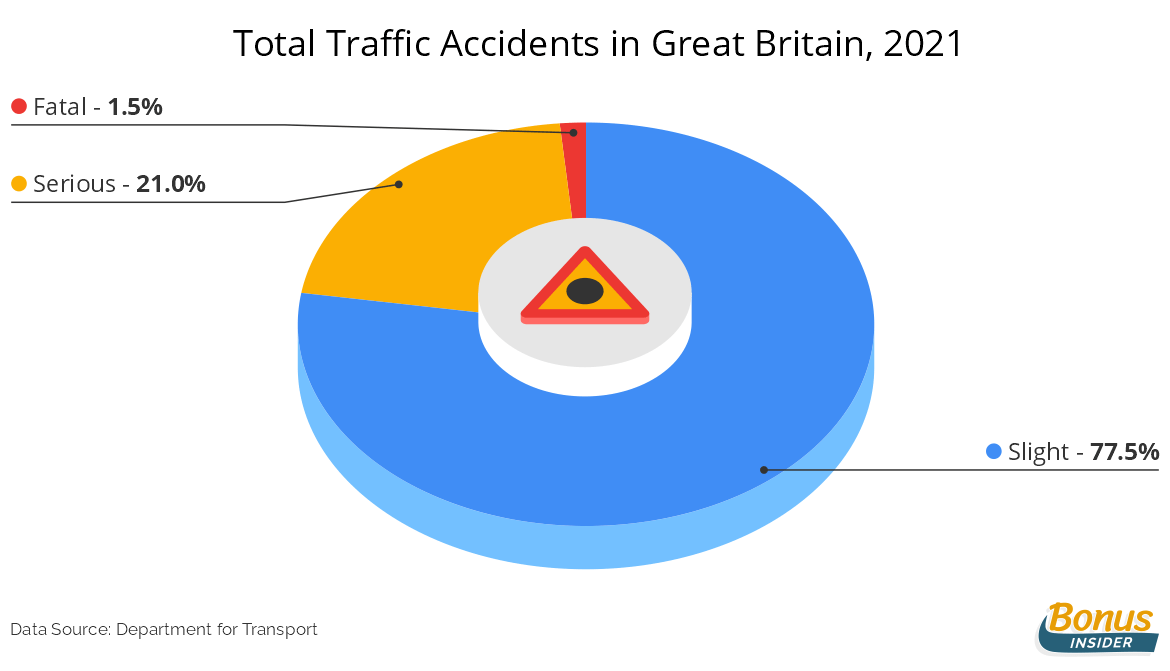 This is an increase of 6.07% compared to 2020, when the pandemic slowed down most of our lives, and led to less traffic and subsequently, fewer casualties on the roads. Still, compared to pre-pandemic levels, traffic fatalities are significantly fewer – exactly 200 fewer deaths from 2019, which is a drop of 11.06%.

To collect data for this report, BonusInsider analysed the latest road traffic statistics published by the Department for Transport. These are based on Police STATS19 reports that have been filed for all road accidents which resulted in personal injury. Population data for England and Wales was taken from official government statistics of the 2021 Census, while for Scotland, data for 2020 published by the local councils was used. Most statistics for Northern Ireland, however, are published separately and include different details on traffic accidents. For this reason, some of the infographics created feature data for England, Scotland, and Wales alone.

For the list of the deadliest roads, data was collected from the Road Safety Foundation and its report “Building Back Safer. British EuroRap: Crash Risk Mapping Results 2021”, which includes the latest available figures by the Foundation, as well as data from the European Road Assessment Programme.

South East is the Most Dangerous Region

Most Accidents Occur in Daylight and in Fine Weather

The traffic data shows that most accidents, nearly 73%, occur in daylight, which makes sense, considering there is more traffic during the day. Nearly 19.7% of the crashes in 2021 happened during the night when vehicles had their lights turned on – in only 0.7% of the cases, the lights were turned off. 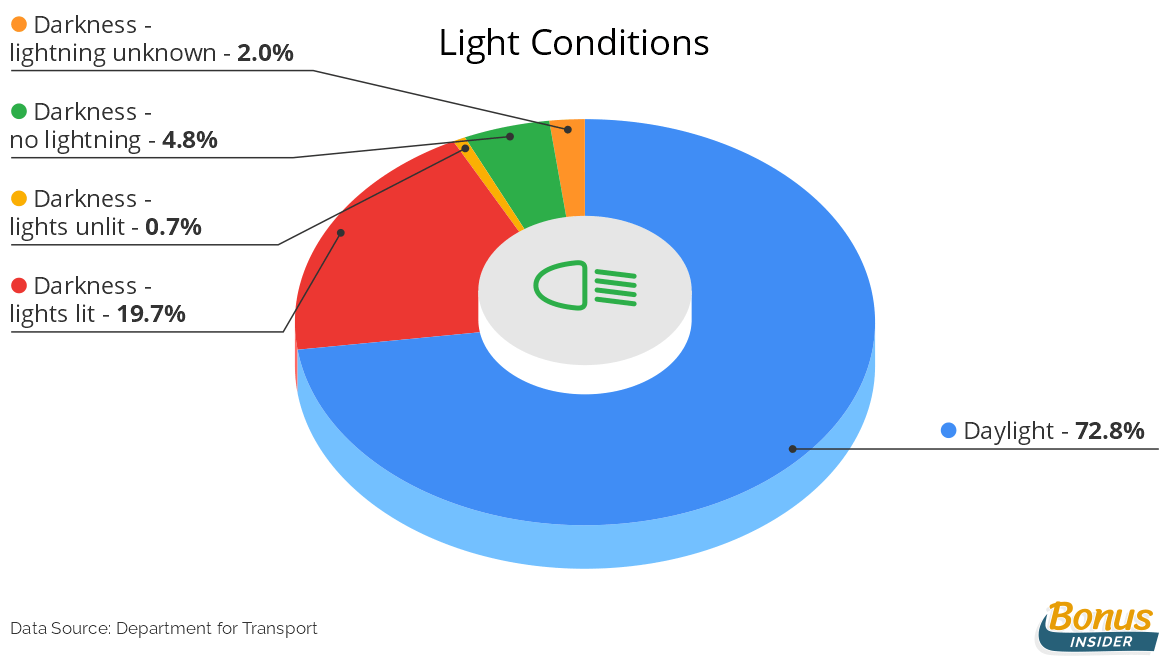 Interestingly, the weather conditions were good when 80.8% of all accidents occurred, compared to a little over 11.3% happening in rainy weather, 0.7% while it was snowing, and only 0.4% in mist or fog. 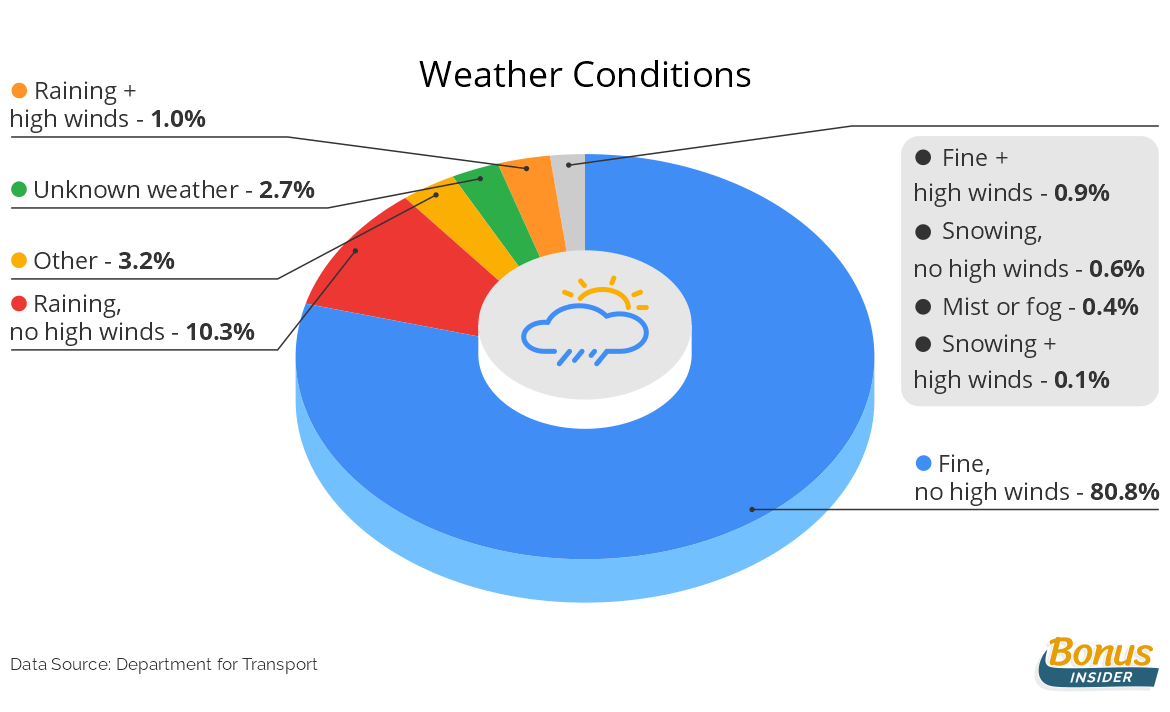 It is also worth noting that nearly 70% of all collisions occurred on roads where the speed limit is 30 mph – these are typically roads in urban areas. Only 3.35% of the accidents happened on motorways. 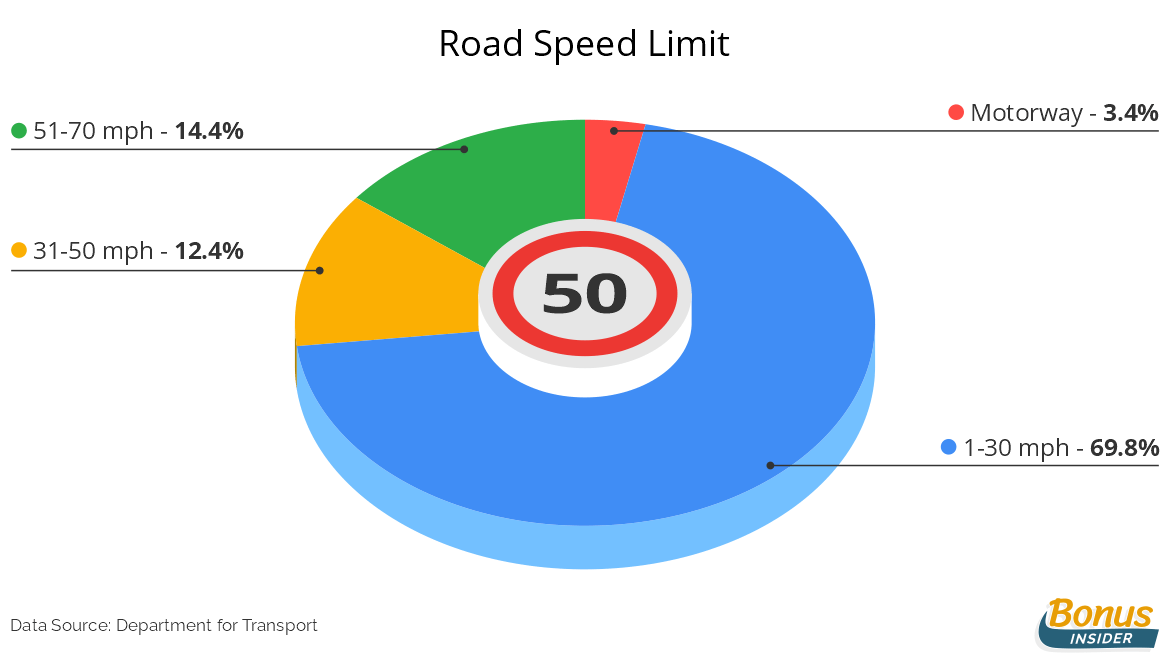 Britain’s Counties with the Most Traffic Fatalities per Capita

The Department for Transport publishes detailed data on traffic accidents, as reported by the different counties and city councils, thus making it possible to identify the counties with the most traffic fatalities per capita. According to the figures of the past 10 years, the City of London has the highest road fatality rate in all of Great Britain – 18.6 deaths per capita, or 18.6 fatalities per 10,000 residents, which is twice as high as the rates of other counties.

The explanation is quite simple – the City of London is the smallest ceremonial county in the UK. Covering a mere 1.12 sq mi, it has a population of 8,600, being mainly a business-oriented area. The country’s financial and trading sectors are largely based in the City, along with numerous office buildings and company headquarters, generating a lot of traffic. Very few people actually live in the City.

*Does not include data for Northern Ireland

Northamptonshire, a county in the East Midlands with a population of 359,500, has the second-highest traffic fatality rate – 307 deaths or a rate of 8.54 deaths per 10,000 residents. Scotland’s Argyll & Bute and Powys in Wales follow with a rate of roughly 8.51 fatalities per 10,000 residents, and the fourth-highest rate (8.3 per capita) was recorded in Rutland, a county in the East Midlands.

The Deadliest Roads in Great Britain

According to the UK charity Road Safety Foundation, there are 37 “persistently higher risk” rural roads and 34 high risk urban roads in Great Britain. The organisation, whose aim it is to reduce road casualties, collects traffic data for all roads in England, Wales, and Scotland (and recently, for Northern Ireland). It calculates the risk of serious accidents for each road by comparing its length and the number of fatal crashes that have historically occurred on it.

With 26.7 fatal or serious crashes per km occurring between 2014 and 2019, the A23 from London to Brighton is the most dangerous road in Great Britain – a 6 kilometre section alone has seen 160 fatal accidents over the past few years.

*Does not include data for Northern Ireland